Shanghai, August 14 (Gasgoo.com) As members of the Croatian Olympic team arrived at Beijing international airport from August 8 to 10, Great Wall Motor started its 20-day courtesy car service for the team during the Games, said sina.com.cn today. 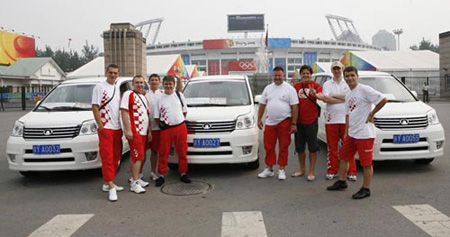 Great Wall Motor provided eight compact passenger vehicles to the Croatian Olympic delegation: four units of Hover, three units of Cowry, and one unit of Gwperi. All the well-chosen drivers have been professionally trained in English and business civility, and they went to Beijing to know the Olympic traffic roads before the Games began. All of this promises that they will provide the Croatian team with high-quality service.

Mr. ZLatko Mstesa, chairman of Croatian Olympic committee, told journalists that Great Wall Motor has gained a high reputation in Croatia, the ownership of Great Wall Motor vehicles in Croatia keeping growing, and GW Hover is one of the most popular Chinese vehicles. "As a famous carmaker of this year's Olympics host country, Great Wall Motor ... will make us more confident of gaining good results [in the games]," he added.

Great Wall Motor launched its products into the Croatia market starting 2006, and it chose the Kemex-Delta company as its distributor. Over the past two years, Kemex-Delta has built up a perfect sales network across country, and the brand popularity of GWM in this country has improved greatly.

Kemex-Delta's chief manager said it is something exhilarating that Great Wall Motor's cars are chosen as the official vehicles of the Croatian Olympic delegation.